The Ukraine Conflict In 2019: Prospects For De-escalation Look Remote

It has been almost five years since the signing of the Minsk Agreements, which represent the only existing conduit for the gradual de-escalation of this conflict. However, increasing ceasefire violations and obstruction of monitoring suggest that de-escalation remains unlikely. 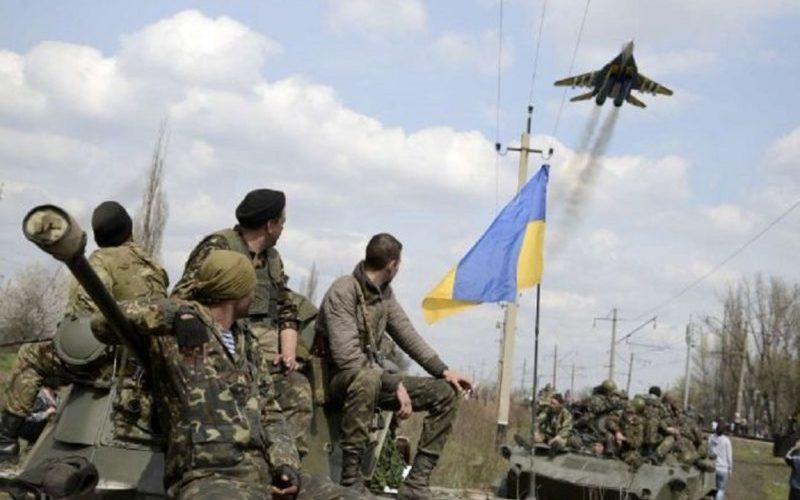 Currently, there is no progress towards the implementation of the Minsk Agreements, amid constant ceasefire violations and the continued presence of heavy weaponry in the conflict area. There are growing military losses on both sides and ongoing civilian casualties. Moreover, monitoring by the OSCE’s SMM (Special Monitoring Mission) faces severe impediments. Discussions within the framework of Normandy Four format and the Trilateral Contact Group (TCG) on key issues–the exchange of hostages, the ceasefire and withdrawal of heavy weaponry, and illegal formations from the Ukrainian territory–have also been fruitless.

No progress in ceasefire and constant impediments to OSCE monitoring

The provisions of the Minsk Agreements on the withdrawal of heavy weaponry and ceasefire control have been violated on numerous occasions. For instance, over just a couple of weeks in December 2018, there were over 20,000 recorded ceasefire violations and 160 weapons used in direct violation of the agreed withdrawal lines (most of the weapons were used by pro-Russian separatists, in areas controlled by them). Overall, since 2016, there has been a steady increase in ceasefire violations in the Donetsk region, with slightly fewer in the Luhansk region: in total, there were 320,000 and 410,000ceasefire violations in 2016 and 2017 respectively. Although the final data for 2018 is not yet available, given this trend and reports throughout the year, we can expect the number of ceasefire violations to remain at the same or even higher level. 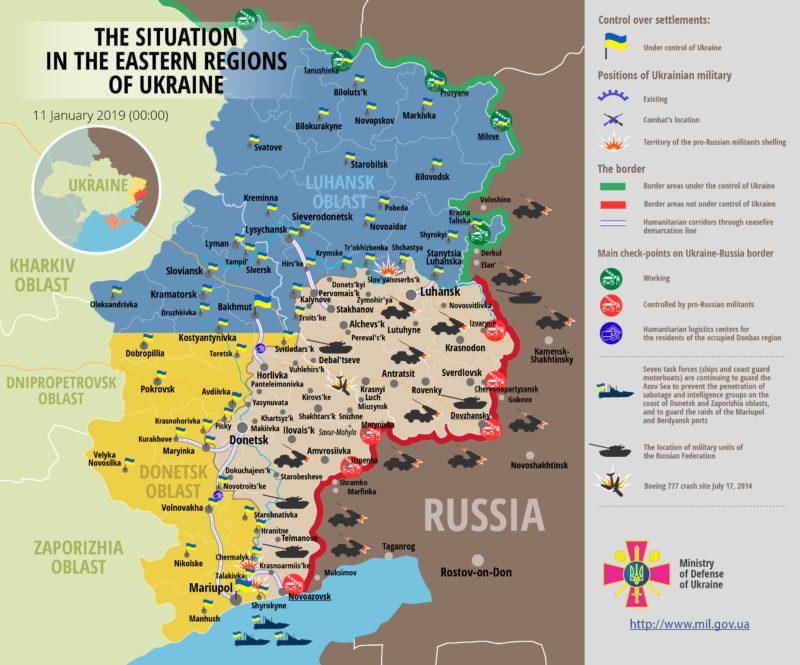 The SMM continues to face difficulty with verifying the withdrawal of heavy arms and ceasefire control, freedom of movement and monitoring of situation along the perimeter of conflict area. In spite of an increase in OSCE observers, it remains problematic for the SMM to monitor the area of the front line of the conflict. The OSCE has at its disposal around 800 international monitors, backed up by a recently relaunched drone surveillance program and video cameras. Nevertheless, SMM’s monitoring efforts have been constantly limited due to restrictions of its freedom of movement. In the period from 1 July 2017 to 30 June 2018, SMM personnel were restricted in its movement 758 times. A large majority of these incidents (87%) occurred in the territories that are under the control of pro-Russian separatists, up from 72% at the start of the given period, which suggests that the degree of obstruction of the SMM’s work is increasing. At the same time, SMM’s monitoring drones are often shut down in the territories controlled by pro-Russian separatists, and video surveillance cameras in the conflict area are attacked.

Since 2016, Ukraine has tried without notable success to reach an agreement on the permanent deployment of SMM’s international monitors along the conflict zone border, within the framework of the Minsk Agreements. This has not materialized mainly because such a change in the mandate of the OSCE’s SMM requires a consensus of all 57 OSCE Member States at the OSCE Permanent Council, and Russia will not support it.

Potential exchange of hostages, special status of the Donbas and recent illegal elections in DPR and LPR

The last major exchange of hostages took place on 27 December 2017 when the parties to the conflict agreed that 73 people be returned to Ukraine and 233 people to the occupied areas of Donbas. In 2018, there was no progress in terms of exchange of hostages. The pro-Russian separatists have prevented the OSCE monitors from visiting Ukrainians convicted by occupation authorities in Donbas. In early December 2018, Ukraine’s representatives on the Trilateral Contact Group in Minsk conveyed a proposal to exchange Russians for Ukrainians held by Russians in prisons and to release pro-Russian separatists in exchange for Ukrainians held in territories under their control. Unfortunately, this proposal was turned down by Russia shortly after that. Nevertheless, there is still a glimpse of hope for such exchange of hostages to take place in early January 2019 if Russia accepts the above proposal put forward by Ukrainians on 21 December again.

In October 2018, the Ukrainian Parliament voted to extend the term of the Law on the Special Status of Donbas until 31 December 2019. It guarantees no criminal or administrative responsibility or punishment for participants of the current conflict in Donetsk and Luhansk oblasts, as well as socio-economic support to the Donbas region, and conducting local elections in compliance with Ukrainian legislation. The extended Law has yet to be signed by the Ukrainian president to come into force, and the implementation of the above provisions is conditional on a full withdrawal of all illegal armed formations, mercenaries, and weaponry from Ukrainian territory.

Nonetheless, on 11 November 2018, the Donetsk and Luhansk “People’s Republics” (DPR and LPR) staged pseudo-presidential and pseudo-parliamentary elections. These not only further undermine the integrity of Ukraine, but also demonstrate a deliberate attempt to institutionalize the LPR and DPR. In concert with the recent naval attacks against Ukrainian vessels in the Azov Sea and the Kerch Strait at the end of November 2018, they seem to be a part of broader destabilization efforts by Russia in light of the presidential elections that will be held in Ukraine in March 2019.

According to various estimates, since the onset of armed conflict in the Donbas region in 2014, Ukraine and the pro-Russian separatists incurred almost 9,000 losses (around 4,000 soldiers by Ukraine and 4,500 by pro-Russian separatists). Moreover, the situation has remained dire for the civilian population on both sides of contact line, as their living conditions deteriorate (e.g. access to proper housing and safe water, basic medical and other services). According to recent SMM findings, civilian casualties persist due to the conflicting parties’ armed formations being placed in populated areas. Since 2014, according to recent UN data, there have been over 3,000 civilian deaths between 7,000-9,000 injuries. The SMM findings state that there were 442 casualties in 2016, 478 in 2017 and around 222 casualties as of mid December 2018 in the direct conflict zone in eastern Ukraine.

A series of high-level meetings took place in 2018 within the Normandy Four format, but have not led to substantial progress. President Putin has stated that further talks must wait until the Ukrainian presidential elections are held. He has also indicated that he believes it is unlikely an agreement will be reached if the current leadership is re-elected; he blames the Ukrainian authorities for the failure to implement the Minsk Agreements, primarily because the Law on the Special Status of Donbas has not come into force. In the meantime, Russia continues its support of LPR and DPR, having recognised the illegal elections that took place in November 2018. Unlike the other three members of the Normandy group (Ukraine, France, and Germany), which strongly condemn the People’s Republics, Russia finds them to be fully in compliance with the Minsk Agreements. Putin

Discussions within the framework of the Trilateral Contact Group (TCG), consisting of representatives from Ukraine, Russia, and OSCE, have not seen major breakthroughs either. Meetings took place in November and December 2018, but yielded no agreement on a number of military-related matters, especially on the exchange of hostages andensuring an indefinite ceasefire. The next meeting of the TCG will take place on 16 January 2019 in Minsk, Belarus. According to Ukraine’s TCG representative Yevhen Marchuk, the focus will be on cancelling the results of the illegal elections held in November in LPR and DPR.

Constant violations of the ceasefire, use of illegal weaponry, and no exchange of hostages, together with impediments to SMM activities and exchanges of blame by both sides, precluded implementation of the Minsk Agreements and resolution of the conflict in eastern Ukraine in 2018.  At the same time, discussions within the framework of the Normandy Four format and the Trilateral Contact Group aimed at achieving such implementation didn’t lead to any substantial progress towards bringing the peace in the Donbas region this year.

The primary obstacle has been that the Russian-backed separatists and the Kremlin have not complied with their obligations and commitments, demanding unilateral concessions on the part of Ukraine while simultaneously breaching the Minsk Agreements on a regular basis. Russia sent a clear signal that no substantial progress should be expected prior to the Ukrainian presidential elections to be held in March 2019. Hence, it unlikely that any positive steps will be taken by the Kremlin or Russian-backed separatists towards de-escalating the conflict in eastern Ukraine in the short term. Moreover, Russia’s recent naval attacks against Ukrainian vessels in the Azov Sea and the Kerch Strait coupled with the approval of the illegal elections held in November in both LPR and DPR demonstrate the Kremlin’s active efforts to put pressure on a pro-Western Ukrainian government and prevent it from further converging with the West.