Money 'in the Wrong Hands' 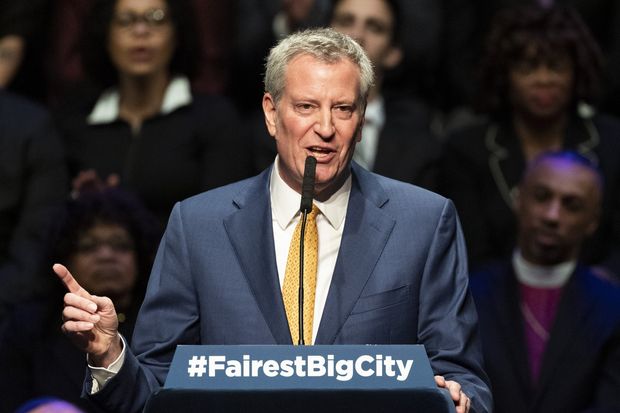 American politics is in part an eternal battle between those who prize freedom and those who demand equality, between the forces of income growth and those of income redistribution, and in 2019 the redistributors are on the march. For the purest distillation of the socialist impulse, look no further than Mayor de Blasio’s statement of raw political purpose that we quote above from his annual address last week.

Why is the party moving so far left?

The mayor says New York’s—and America’s—money is “in the wrong hands,” and his duty is to put it in the right ones. The right hands are presumably his own, by which he can pass that money out to those he and the City Council believe to be more deserving.

But when he says the “wrong hands,” who does he mean exactly? Who are these undeserving malefactors? Presumably he means the wealthy, so let’s mention a few of the New Yorkers he might have in mind.

• Perhaps he means David Koch, the retired businessman and libertarian who donated the entire $65 million cost for the new public plaza in front of the Metropolitan Museum of Art. The more than six million people who visit the museum each year can now stroll past trees and fountains on their way in and out of the Met, which by the way is also supported by private donors.

• Or perhaps the mayor is thinking of Ken Langone, the

founder, who has donated hundreds of millions of dollars to the New York University Medical Center that treats patients of all incomes and social strata. Mr. Langone’s most recent $100 million gift, made last year, will go to provide cost-free tuition for every NYU medical student. Wrong hands?

• Or maybe the mayor has in mind Richard Gilder, who made a fortune in finance and provided the first major grant for the Central Park Conservancy that has rescued the park from its sad mid-20th-century decline. Each year the conservancy, led by private donors, restores eroding corners of this grand public space with new trees, lawns, playgrounds and ballfields that are used by tens of thousands across the city regardless of income.

Mr. Gilder has also given generously to the American Museum of Natural History and the New-York Historical Society, two other favorites for visitors and students of all ways and means.

• Then again the mayor dislikes charter schools, so perhaps he means Stanley Druckenmiller, the legendary investor who has donated hundreds of millions of dollars for Geoffrey Canada’s successful charter-school network in the poorest neighborhoods of the city. These students would otherwise be stuck in failing schools run by Mr. de Blasio’s friends in the teachers union.

But thanks to donations from Mr. Druckenmiller, and hedge-fund operator Dan Loeb’s gifts to the Success Academy charter network, thousands of kids have a shot at a better life.

Here’s the real truth, brothers and sisters. Without the “wrong hands” that Mr. de Blasio despises, there would be no wealth or income to redistribute. Without the fruits of capitalist invention and business success, there would be no philanthropists to preserve the parks, to rebuild crumbling public spaces, to donate to the museums that give the non-rich a glimpse of great art and history, or to provide an alternative to failing public schools that cheat poor children of opportunity.

As for Mr. de Blasio’s right hands, there are those failing schools. And don’t forget the New York City Housing Authority, which last year had to sign a consent decree with the federal government for lying about its failure to provide safe and sanitary conditions.

Perhaps those are the hands Mr. de Blasio should do something about.