The deployment of rifles with presumably live ammunition visible through the magazine is an intimidating escalation as President Emmanuel Macron continues to lose his grip over France following nine weeks of country-wide protests by the Gilet Jaunes (Yellow Vest) movement.

The Gilet Jaunes began as a demonstration against a climate change-linked fuel tax, which quickly morphed into a general anti-government protest against the Macron administration and the world’s highest taxes. We’re sure France’s plege to send 1 billion euros to rebuild Iraq will help calm them down.

Riot police in France now armed with G36 assault rifles against unarmed civilians. WHERE IS THE NEWS COVERAGE?https://t.co/NqglT52MTk

Yellow Vest demonstrator Gilles Caron told the Mail “The CRS with the guns were wearing riot control helmets and body armour – they were not a specialised firearms unit,” adding “Their job was simply to threaten us with lethal weapons in a manner which is very troubling. We deserve some explanations.” 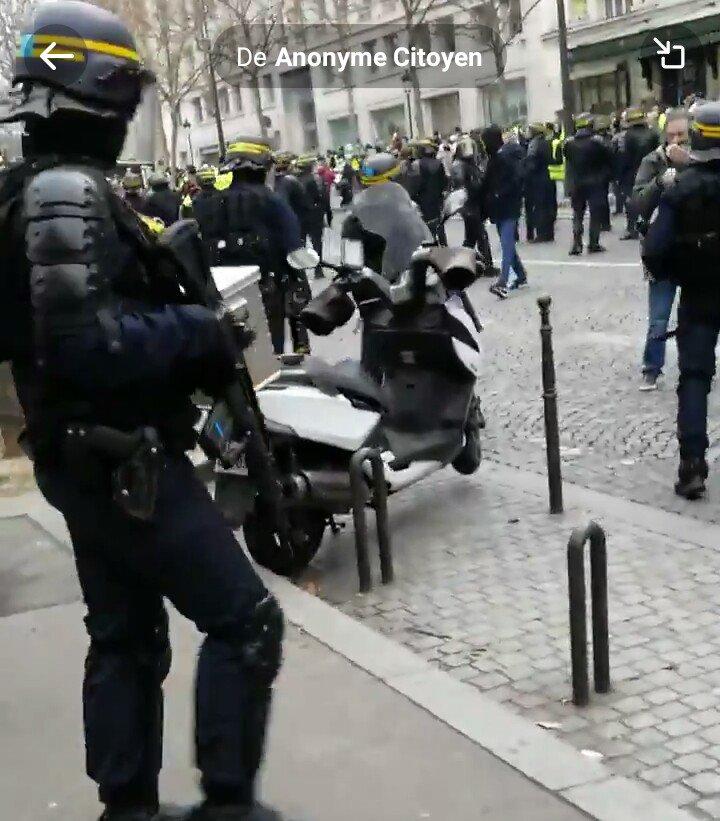 A French National Police spokesman confirmed that the CRS were equipped with H&K G36s on Saturday, but would not discuss their operational use ‘for security reasons’.

A G36 was stolen from inside a police van during a similar Yellow Vest demonstration by the Arc de Triomphe on December 1.

A number of vehicles belonging to the 21stIntervention Company of the Paris Prefecture were stormed, suggesting that the theft was an opportunistic one during a day of intense violence, when the Arc de Triomphe itself was vandalised. –Daily Mail

Former French conservative minister Luc Ferry called for live rounds to be used against the Yellow Vest “thugs” who “beat up police,” such as this former pro heavyweight boxer, 37-year-old Christophe Dettinger who was arrested after squaring off with several French police officers.

Ferry – a full time philosopher now, said: “What I don’t understand is that we don’t give the means to the police to put an end to this violence.” When challenged with the suggestion that the guns might lead to bloodshed, Ferry said: “So what? Listen, frankly, when you see guys beating up an unfortunate policeman on the floor, that’s when they should use their weapons once and for all! That’s enough.“

January 14, 2019
Responding to comments from Canadian Prime Minister Justin Trudeau, who over the weekend accused China of violating the ... More